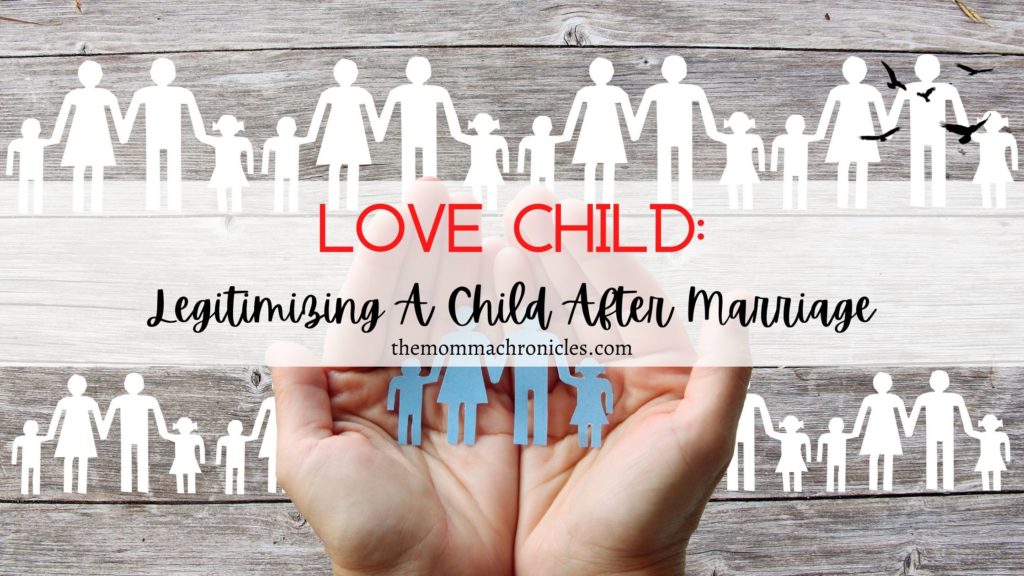 I have a confession to make: I got pregnant before I was married to my then boyfriend, now husband. It was summer of 2011 and first year in law school just ended when I found out I had a bun in the oven. Obviously, my parents weren’t very happy about it. My (sort of) conservative dad wanted us to get married, even if it means civil rites, for the baby’s sake. My open-minded mom on the other hand is not into the idea of getting married kasi nabuntis.

Of course, we still had it our way. We didn’t get married just because I got pregnant, which means our baby is illegitimate. I didn’t worry too much since we will get married eventually and there are no, if I may use it, legal impediments along the way. We are both unmarried, had no previous marriage and no children outside of the relationship so no problem with that.

Plus, my daughter was recognized under Republic Act 9255, also known as Revilla amendment (yes, as in the Ramon Revilla Sr. so you get the picture). The amendment states that as long as the father recognized the child, s/he can use his surname.

Then I got pregnant again with Baby No. 2, also recognized by my now husband. My dad once again brought up the topic of marriage since being the segurista one, he wants to make sure that his grandchildren are in good hands in case something happened to my then-boyfriend.

To appease him and for many legal reasons, we finally got married in a civil rites. This means from being illegitimate children, my kids are now legitimated. The question now is what happens after this? Also, what does “legitimated” means?

Article 164 of the Family Code defines legitimate child as someone conceived or born during a valid marriage. Even if your marriage is annulled, any child born prior to judgment of annulment or absolute nullity of marriage is still a legitimate child.

On the other hand, an illegitimate child is someone who is conceived and born outside of a valid marriage. This means the child is a product of a common law marriage (there is still no legal marriage in this), bigamous or  relationships, incestuous marriage, couples below 18 or any other types of void marriages provided for by the Family Code. When a child is illegitimate, s/he is required to use the mother’s surname unless the child was expressly recognized by the father according to the Revilla amendment.

When a child is recognized, there will be an annotation on the child’s birth certificate that states “Acknowledged by Father pursuant to RA 9255.” Then on the second page, both parents must sign the Affidavit of Acknowledgement / Admission of Paternity as shown below. 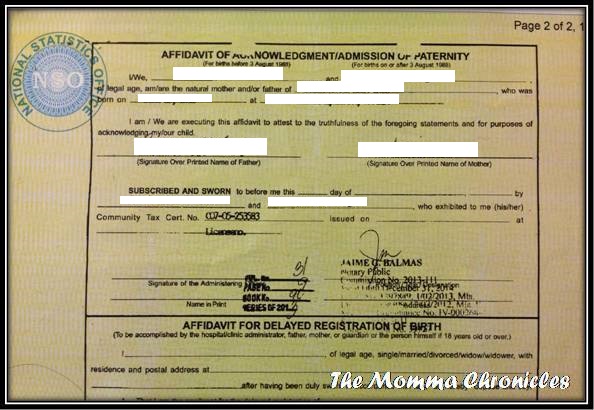 Lastly, a child is legitimated when a valid marriage between the biological parents took place after the child is born. To qualify for legitimation, the following requirements must be complied with –

According to Article 177 of the Family Code, “Only children conceived and born outside of wedlock of parents who, at the time of the conception of the former, were not disqualified by any impediment to marry each other may be legitimated.” 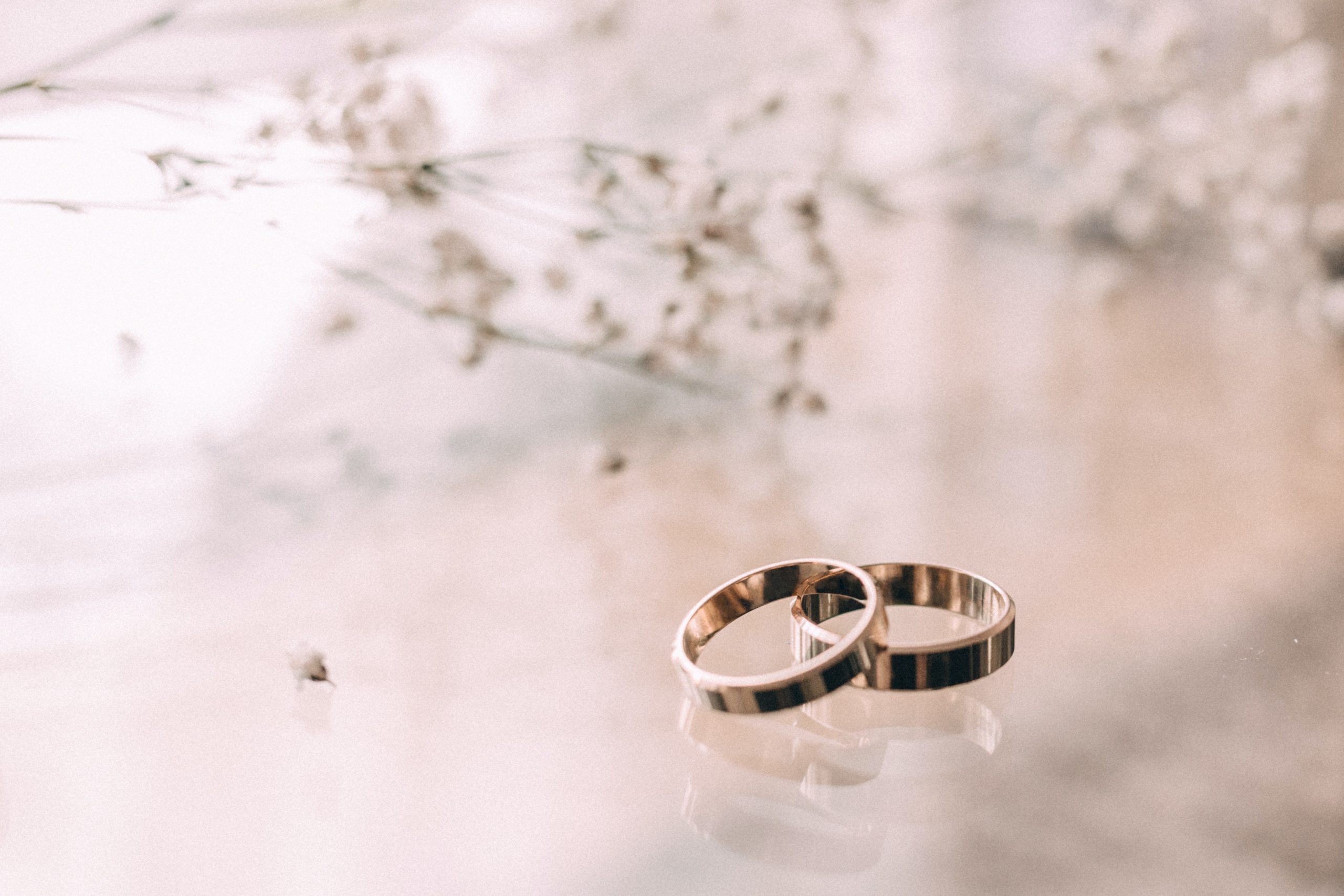 This means after the marriage, the illegitimate child automatically becomes legitimated and shall enjoy the same rights as legitimate children pursuant to Article 179 of the Family Code. Take note that the operative word here is automatic. Also, the effects of legitimation is retroactive at the time of the child’s birth, which means it’s as if your child is a legitimate one from the beginning.

The next question now is what happens after the marriage? Is there anything that needs to be done to make sure that the legitimated child enjoys the benefits of legitimate children?

For me, this is a gray area. I was privileged to take up Family Law under Atty. Katrina Legarda during my first year. From what I remember during our discussions about Paternity and Filiation, legitimation happens automatically upon marriage of parents. In fact, the Family Code does not require you to do anything to ensure legitimation – as long as you get married, had no legal impediments at the time of the child’s birth and such marriage is valid.

Come to think of it. Why pose a burden on a child’s status when there is valid marriage between the parents, even if the marriage was after birth, right? It’s not the child’s fault anyway.

However, the National Statistics Office requires the parents to execute an Affidavit of Legitimation, which must be registered in the local civil registrar of the city or municipality where the birth was recorded. It should contain the following:

I’m not sure if the Affidavit of Legitimation is necessary because nowhere in the Family Code will you see this requirement. But for purposes of compliance and to avoid any issues in the future, it best to submit one. 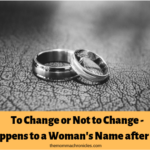 What happens to a woman’s name after marriage?